Casting call for Virginia drama could put Coker in the spotlight

As the Clown Show that is the Virginia Democratic Party unfolded this past week, we thought the unfolding scandal was just ripe for a Netflix or HBO mini-series.  As of yesterday the Virginia, Cradle of Presidents, has produced three state officials — all Democrats — who are apparently either racists in blackface, racists in KKK garb, a post-birth abortionist and/or a sexual predator.  Damn, we thought, we should have paid closer attention in screenwriting class in college — we could make a mint!

But there are other Tennesseans who might be able to cash in.  So when we stumbled across this on the InterChatNetFace, we got a great idea: 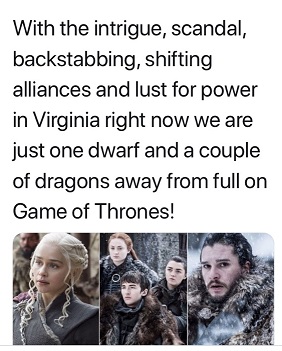 When the casting call goes out for Game of Thrones:  Virginia Edition we don’t know where they can find any dragons, but we gotcher dwarf right here:

And best of all, Bob’s scheduled just recently completely opened up.  He’s tan, rested and just itching for a new gig.

You are welcome, Hollywood.