Is Bob Corker About to Re-Enter the Senate race? 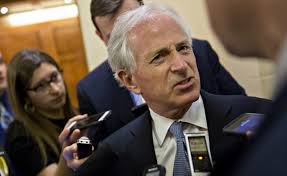 Rocky Top has heard the rumor from multiple sources.  Is it true?

We don’t know.  But the rumor and the spin-off speculation has become so prevalent that it is impossible to ignore.

Here is the gist of it:

Corker is looking seriously at “un-retirement” and/or is being encouraged to do so by prominent financial players who are worried that former Cong. Stephen Fincher is badly trailing Cong. Marsha Blackburn.  Independent and internal polls that we have seen confirm that Fincher is losing by as many as 35 points.  After bragging late last year that he would significantly outraise Blackburn, the most recent FEC reports show that it was Blackburn took those honors by several hundred thousand dollars, increasing the fundraising gap with Fincher.  All this has dramatically increased the discomfort among the state’s establishment Republicans who loathe Blackburn and her independent brand of conservatism.

The name at the center of the rumors is – no surprise – Tom Ingram.  Ingram has reportedly made numerous calls sounding out leaders’ opinions for a Corker redux. If Ingram is involved, it’s real.

For his part, Corker is said to have been surprised at how quickly his influence in the Senate has waned since he announced his retirement last fall.  For someone whose ego is considered one of the biggest in the Senate (no mean feat), his growing irrelevance has been more than he bargained for.  RTP sources in DC report that Corker has rather openly speculated about a run for President in 2020, with or without Trump on the ballot (stop laughing, it’s true) but that is a pretty farfetched possibility.

That leads us to offer some of our patented, astute political analysis as to what may be behind these rumors:

This could all get real interesting, real fast.