Okay, whose nose is growing the quickest? 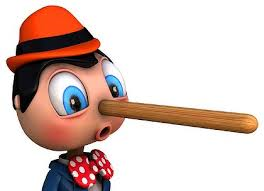 When long-time Republican stalwart Susan Richardson Hyphen Williams excitedly revealed that Speaker Beth Harwell had recently called to say she was running for governor, Susan apparently let the cat out of the cellophane bag on Harwell’s guber-bid by posting the news on Facebook.

Her cover blown, Harwell quickly talked to an AP reporter to say that “no final decisions have been made and won’t be made until after the election.”  The problem with that statement is that it directly contradicts what Richardson-Williams says she was told by Harwell.

Look, this ain’t hard:  there is one question that no one is asking, so RTP will helpfully stick our collective noses into the discussion and just spit it out:

Q:  Did Harwell tell SRW she was running?  Yes or No?

If Harwell’s answer is “yes” then Harwell is lying to the public and the press.  If her answer is “No” then she is saying SRW is lying about their conversation.

Which is it Madam Speaker?

Kicking off a governor’s race by either misleading the public and/or calling a long-time GOP activist a liar is not a slick move.