Will Durham Trigger the Nuclear Option? 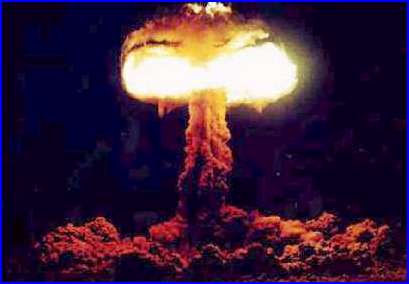 Time for All You John and Jane Does to “Duck & Cover.”

RTP sources (and there are many) are telling us that when a resolution to expel him is put forward in this week’s special session, Jeremy Durham is seriously considering invoking his right to a hearing.  This would theoretically allow him to face his accusers and call witnesses (are you reading this, Jane Doe #38?).

One revels in the thought of Durham calling one or both current committee chairmen who are allegedly guilty of nefarious acts similar to what Durham has been accused of.  That’s right – we said “accused.”  For you see, despite an AG’s investigation, numerous lamentations from leadership, almost daily rehasing article in the Tennessean (and the Tennessean’s live-in girlfriend at Channel 4) a whole host of Jane and John Doe anonymous accusations, Durham has yet to be charged with one damn thing.

Oh sure, the speaker and her cronies dutifully issue pieties such as “Durham had his chance.”  If that “chance” meant he could have appeared before the unethical (and likely illegal) AG investigation and watched while they roasted him on a spit while trying to protect everyone else’s anonymity but Durham’s, then yeah – he had his chance.  As in Fat Chance (“Here, gentlemen, I brought along some extra ammunition for my firing squad, just in case you miss the first time…”).

Now all this is not to say Rep. Pants Candy is not guilty.  Hell, he is almost definitely guilty of something.  But even carousers like Durham have certain inconvenient rights under the state constitution. And we hear he is giving serious thought to demanding his day in court.  Why, he could even call the Speaker to the docket to ask her “what did you know and when did you know it” when it comes to sexual harassment and other misdeeds by her cronies and even her former staff member (who we understand is in “rehab” and is conveniently unavailable for comment).

Multiple members are begging off attending the special session, many no doubt operating under the rationale that why should their lives be disrupted by the incompetence of leadership to get their act together.  But we hear the two chairmen appointed by Harwell and who reportedly have exhibited cases of “Durham Disease” (which was reportedly dutifully covered up by the Speaker) will be in attendance.  You’ll be able to identify them because they will be the ones with paper bags over their heads.

At least one member of the Rocky Top crew will be on hand with extra popcorn and praying that Jeremy pulls the trigger.