Be Careful What You Ask For…

Leadership re-election polls are in — and it looks bad for Leadership.

Trying to divine the intricacies of House GOP leadership elections is a difficult task at best, what with all the back-stabbing, lobbying, threats and sucking up that goes with those in power trying to hang on to their jobs.

But after the recent  — and coming — controversies plaguing the House leadership, we have been given a gift — a poll of the leadership elections in advance of their (currently) scheduled date in December.

And this isn’t just any old poll, nosiree.  This is a poll with a 100% sample size (meaning everyone involved participated, either actively or passively) which means there is 0.00% “margin of error.”  Even more remarkable is this poll was initiated by leadership itself, which means they cannot deny its significance or question its methods or sources.

The poll is simple.  Think of a “vote of no-confidence” that one sees with parliamentary elections in places like England, and you’ll realize the importance of what just took place.  As usual, the news media wrote about the poll while missing entirely the significance of its findings.  Having to explain basic politics to the MSM is getting a bit tiresome, but hey — it’s why the Good Lord invented Rocky Top.

By now you are probably wondering: “what are those morons at RTP talking about?”  Well here ya go:

Majority Leader Gerald McCormick, under the active participation and guidance of Speaker Beth Harwell, came up with the bright idea of finding a dead horse and attempting to beat the living crap out of it one more time.  We are talking, of course, about the resolution to hold a special session to drive a stake in the heart of Jeremy Durham (this after politically executing him many times over).  After leaving the polls open for a couple of weeks, here are the results:

After posturing and pontificating, the authors of the resolutions (Speaker Harwell and Majority Leader McCormick) could only talk 27 members out of 99 into signing the petition calling for the special session.

Does anybody believe Jimmy Naifeh would have (a) offered such a resolution without first knowing the level of support, or (b) let the House flip off the Speaker (and Maj. Leader) in such an embarrassing and public way?

Humiliating is not the word for it.  It is a direct rebuke to McCormick and especially Harwell because over 3/4 of the House GOP caucus voted against leadership. Think about that for a moment.  Apparently they didn’t learn a damn thing from the embarrassing 85-11 Common Core vote back in 2014.  It’s no wonder that Gerald made such an early announcement that he was going to run for majority leader again.  It’s never too early to try and paint over one’s glaring mistakes.

RTP has spoken to some legislators who are furious that, once again, Harwell’s bad judgement has potentially set them up for attacks in the next election (You can see the mailings now:  “Rep. John Smith refused to sign a resolution to expel Jeremy Durham.  How can we vote for him after that?”).  It seems that in an attempt to ride the Durham train one more time, Harwell has shown she is more than willing to sacrifice her colleagues to cover her own butt.

What are YOU laughing at Glen? 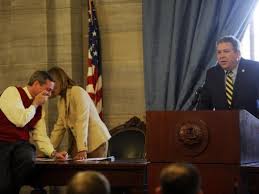 up a similar resolution going after Rep. Joe Armstrong.  That Armstrong was only days away from going to trial on tax evasion (and, indeed, was convicted just last week), didn’t seem to matter to Glen.  Can’t have anyone else getting all the glory when there is another dead horse to beat, eh, Glen?

The results were ever more devastating:

Everybody else in the legislature: 83%

It’s no wonder that others in the GOP caucus are looking to run for leadership positions.

Lord knows we could use the change.