Showdown at High Noon (or 1:30pm CDT, to be more precise) 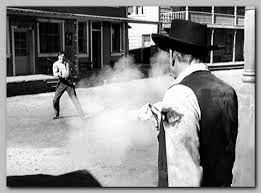 Okay, political hacks and hangers-on, time to place your bets.  The question of the day is:

“Will Jeremy Durham win all or any part of his lawsuit against the Attorney General, the Speaker and the Ad Hoc Committee?”

Oh, you silly, naïve neophytes.  Where have you been during the Clinton/Obama years?  By now, you should have learned the new enlightened central premise of today’s politics:

“Rules are for little people.”

Maybe this judge has a backbone.  Maybe his 14 years working for the AG’s office won’t cloud his judgement. Maybe the Tooth Fairy will bring the RTP crew an endless supply of Jack Daniels Single Barrel.

From our reading of the complaint and the AG’s response some things seem clear.  The Speaker, the AG and the Chairman of the Ad Hoc Committee violated House rules and the state Constitution.  It is equally clear the AG will argue that none of that matters, since what is important that we get this information out to the public (and just in time for early voting to start).

Yesterday, Breitbart News added more information to their previous reporting, particularly about the people who have been interviewed during the investigation.  Some chilling quotes from those who were actually hauled into the Star Chamber:

If you are a legislator and these words don’t scare the hell out of you, then you are simply not paying attention.  Jeremy Durham may be guilty as hell of everything he has been accused of.  But that does not excuse the Powers-That-Be from following the law.  Especially when the clear signal being sent from the Speaker and others to legislators is “You could be next.”

See you on the Courthouse steps.  We’ll be the ones holding the signs that say “Will Blog 4 Booze.”