Harwell on the spot over Refugee Resettlement Resolution 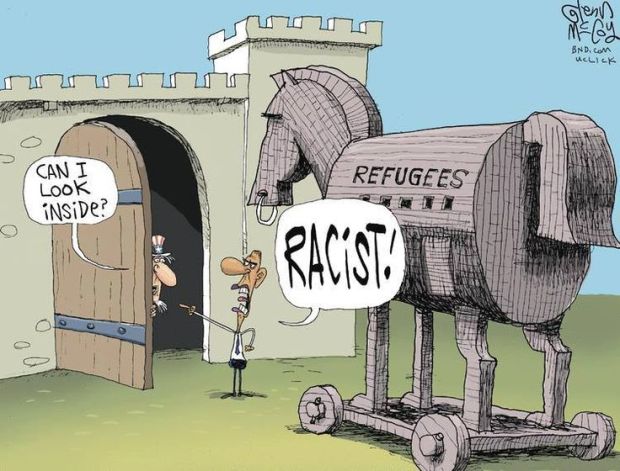 It’s amazing what 71 signatures on a piece of paper can do.

The resolution to sue the federal government over illegal refugee resettlement programs is working its way through the state legislature. It overwhelmingly passed in the Senate and a petition supporting the lawsuit circulated in the House got the signature of every member of the GOP caucus, except one.

But while the resolution was making its way from the Senate to the House, Gov. Bill Haslam weighed in with his opposition. Seems Bill thought his buddy Barack was doing a spiffy job vetting refugees from terrorist countries and then dumping them on unsuspecting states like Tennessee, even though Obama’s own Homeland Security office was warning that they had little ability to detect terrorists which are almost certainly embedded among the migrants.

So today, the House State Government committee voted out the bill to the full committee. It was a voice vote, naturally (wouldn’t want to actually go on the record with a roll call vote on something like this, would we?). Word from those there was that Chairman Bill Sanderson got all weak in the knees, but in the end sent it on to the full committee.

The chairman of the full committee is Rep. Bob Ramsey – the one Republican who refused to sign the petition in favor of the resolution. Ramsey says his religious beliefs don’t allow him to turn Muslim refugees away. No word on whether his beliefs extend to the Christians from the Middle East who are being beheaded, sold into sex slavery, etc. The Obama administration is trying to let in Muslim “refugees” to the almost complete exclusion of persecuted Christians. Rep. Ramsey seems to be practicing situational empathy.

This is where it gets a little dicey for Harwell. If for any reason the resolution gets bottled up in Ramsey’s committee and does not make it to the House floor for a full vote – and passed — you will see a huge revolt by the rank and file in the House GOP caucus. And that’s why Harwell is on the spot. Her leadership will be questioned – again – if she cannot deliver a victory on legislation that has 71 Republican legislators on record as being for the resolution. Just because Bill Haslam thinks the Obama administration is doing a great job dumping Muslim refugees in Tennessee without our permission doesn’t mean Harwell can drop the ball.

Not on this one. Not now.