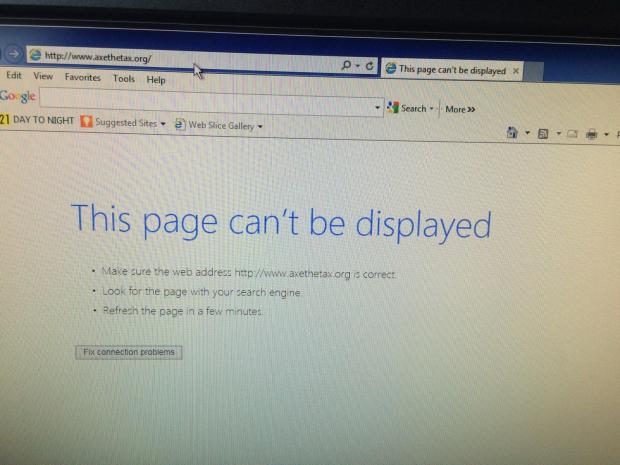 A couple of days ago, Americans for Prosperity launched a new website (www.axethetax.org) to fight the governor’s drive to raise gas taxes on Tennesseans. As websites go, it was rather simple, but effective. It merely lists the answers from legislators when they were asked: “Do you support or oppose an increase in the gas tax?” Of course supporters of the gas tax (such as Gov. Haslam, the Chamber of Commerce, the Roadbuilders, Ron Ramsey, etc.) were not happy when nearly half of the legislature immediately registered their opposition.

So when a loyal RTP tipster told us immediately following the launch of the site that the computer system at the General Assembly was blocking access to the sight, we were skeptical. Surely, we thought, the leadership and/or its techno-lackeys wouldn’t be so stupid to censor the AFP? This must be some short-term glitch which would be immediately fixed.

But RTP kept getting reports that the site remained locked out at the Plaza — you could access from any computer anywhere except on the TGA server. Some staff were afraid to even try to access the site because they feared their efforts to do so would be captured by the techies and handed over to leadership. A little paranoid perhaps?

So RTP sent one its trusted operatives down to the LP earlier today (Wednesday) to see if the reports were true. They were.  No access through the TGA server.

So what now? After two days, one might be excused if they start to get a little paranoid. Who authorized the blocking of the website? Was it the brain fart of a low level IT kiss up or did the order to censor the site come down from above?

RTP will venture a guess: Look for the usual excuse that it was an inadvertent technical glitch and that it has now been fixed. But don’t you believe it.

Just because you’re paranoid doesn’t mean someone is not out to get you.