The Klown Kar that is the Haslam Administration

Just a couple of days ago, RTP noted a day of reckoning for Gov. Bill Haslam.   July 13th is “Nathan Bedford Forrest Day” and we wondered if Haslam would sign the required state proclamation honoring the very person whose statue the governor recently said he wanted to remove from the state capitol.

Well as it turns out, at the time when Haslam was genuflecting before the alter of political of correctness, he should have remembered that he had already signed the “We Love Forrest” proclamation just a few days prior to his declaration that Forrest was some sort f bad dude who should be relegated to the janitor’s closet in the new $160 million state history museum.

As you can see below, The July 13th proclamation was actually signed back on June 2nd, which was only days before Haslam’s assertion that a bronze bust of Forrest was somehow a real & present danger to the citizens of Tennessee and the United States.

Uh, remind us again – when exactly does Jim Henry start? 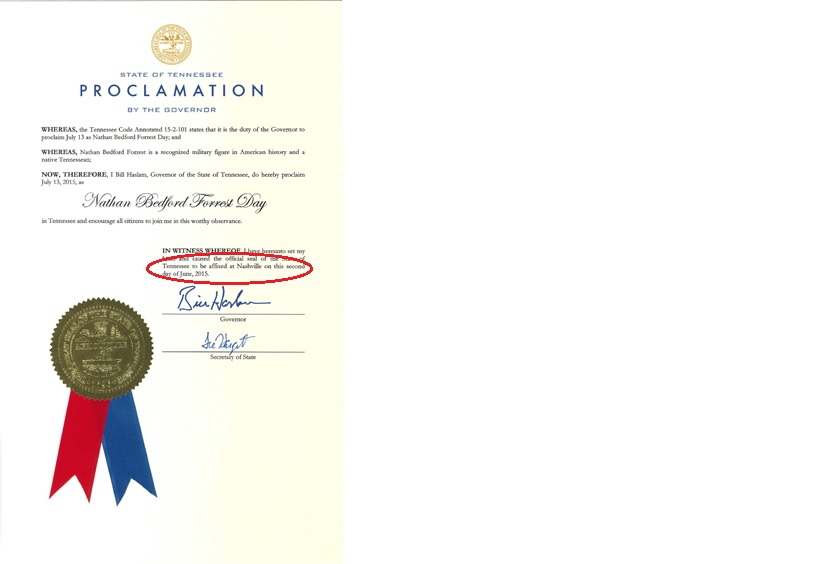 One of the negative raps on Sen. Ted Cruz is that he is a little “crazy” – a little too hot-headed, etc. RTP does not agree. The crew here loves Ted Cruz, if for no other reason his astonishing command of the U.S. Constitution. That, and he made Diane Feinstein cry.

But his campaign staff did the good Senator no favors when they settled (and we do mean, “settled”) for Kevin Kookogey as the Cruz chairman in Tennessee.

If they had done just a modicum of advance work, they would have discovered that Kookogey possesses little real political experience but does possess the negative characteristics that critics are trying to unfairly apply to the Senator: nutty, hot-headed, crazy, grandstanding, etc.

And now “The Kook” has taken it a step further. He recently began a series of emails to GOP political types around the state, highlighting what he believes to be some sort of ideological deficiency in Gov. Scott Walker. Walker, who is consistently one of the top 2 candidates in the polls, appears to have made an impression (or is it an obsession?) with Kookogey, to the point that now Kookogey has been caught distributing stuff that turns out not to be true.

A few days ago, Kookogey excitedly mass-emailed a link (See below–hat tip to one of our Knoxville tipsters) to an article implying that Walker was somehow soft on immigration. The article cited a New York Times story (Really? The New York Times?) about a Heritage Foundation employee who claimed he had a personal phone conversation with Walker in which Walker stated he was not a “nativist” on immigration.

We-e-e-l-l-l, it turns out there was not any statement of the sort by Walker and that the conversation with the Heritage employee and Walker never even happened. When confronted, the employee had to publicly take it all back.  Kookogey, in his mad rush to circulate anything negative on Cruz opponents was left with serious egg on his face.

Apparently, The Kook will believe anything as long as it smears one of his candidate’s opponents, especially if it comes from that bastion of unbiased, fair, pro-Republican reporting called the New York Times.

[Tip to Kookogey: We hear Marco Rubio is the love child born of an illicit affair between Carly Fiorina and Mike Huckabee. Feel free to use that in your next email blast.]

Ted Cruz deserves better than Kevin Kookogey. And so does Tennessee.

Will He or Won’t He? 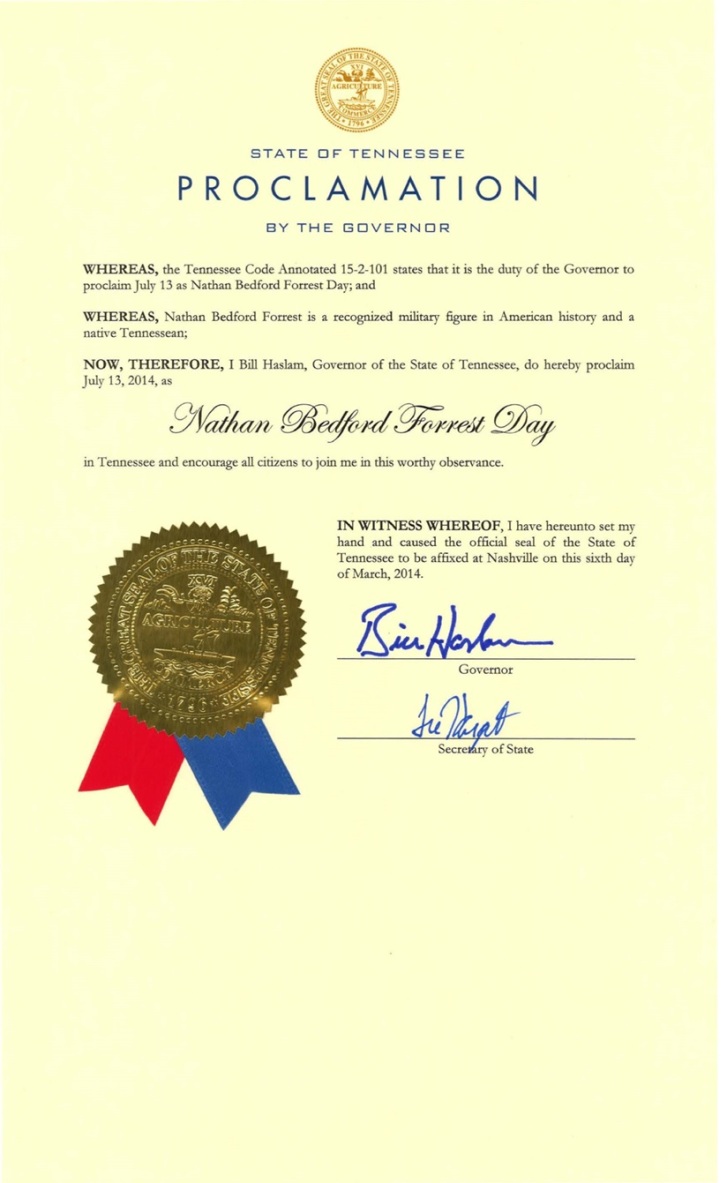 Gov. Bill Haslam’s call to remove the bust of Forrest from the state capitol comes less than a year after he proclaimed “Nathan Bedford Forrest Day” in the Great State of Tennessee. And coming up next Monday is the day that is designated by law for such an occasion. Here is the relevant statute.

Each year it is the duty of the governor of this state to proclaim the following as days of special observance: January 19, “Robert E. Lee Day”; February 12, “Abraham Lincoln Day”; March 15, “Andrew Jackson Day”; June 3, “Memorial Day” or “Confederate Decoration Day”; July 13, “Nathan Bedford Forrest Day”; and November 11, “Veterans’ Day.” The governor shall invite the people of this state to observe the days in schools, churches, and other suitable places with appropriate ceremonies expressive of the public sentiment befitting the anniversary of such dates.

So-o-o-o-o. Will Bill do what he has done 4 times in the last 4 years and proclaim a day of “special observance” for Ol’ Nathan? Or will he adhere to his recently acquired politically correct convictions that Forrest should be cleansed from history like a dead member of the old Soviet Politburo?

Either way, the governor – once again – has placed himself in a quandary of his own making.

Please Jim Henry, for the love of God – make him stop.

Who the heck is Grant Starrett?

One of RTP’s most reliable tipsters has provided this little political gem.

Some 27-year-old guy named Grant Starrett is running for Congress in the 4th district against Scott DesJarlais.

Fair enough. It wouldn’t be much of a surprise that Des Jarlais would have a credible opponent for the fourth time in as many elections (and Lord knows he’s asked for it each time). But “credible” is the key word here. For starters, Starrett says he is running to the right of Des Jarlais. Is that even possible? That’s like trying to run to the left of Barack Obama – ain’t a whole lot of room over there.

Perhaps the most curious aspect to the Starrett candidacy is where he’s from and how he is funded. Starrett got into the race back in April and promptly announce he had already raised $500,000 for his campaign – an impressive sum. But upon further examination, Starrett wrote his campaign a $250,000 personal check. How many 27 year olds do you know who could stroke a check for a quarter million dollars for a political office?  We have no idea where the rest of his money came from.  His next campaign report is due out this month.

Perhaps the answer lies in the source of such a large disposable income. Most folks in the 4th district will never see $250,000 in one place in their lifetime. But there are places where that kinda dough is plentiful. One of those places is California, specifically Pacific Palisades, CA. And it appears Starrett’s parents, who still live in the family mansion there, are loaded. It’s believed it is their money that is bankrolling young Grant.

Until recently, Starrett called this exclusive enclave in southern California his home. The only reason he is even in Tennessee now is because he went to Vandy Law School a couple of years ago.

And now this Stanford-educated, SoCal trust funder from TinsleTown has picked a Tennessee district to buy himself a seat in Congress –in a district that is about as rural and small town (and so not California) as it gets.

But RTP thinks we should give young Grant a chance.  Who knows?  With a degrees from a couple of expensive schools and a long history living in the Land of Conspicuous Consumption (aka California), maybe Starrett can bring a measure of “California culture” to the backwoods citizens of the 4th district.

The “Brie vs. Barbecue” Congressional race: Could be the most entertaining storyline of the 2016 election season.

[Editor’s note:  Are there others out there who know of/about this young whippersnapper?  Send your info to the RTP Tipline (www.rtptipline@gmail.com) and we will disseminate it to the appropriate muckrakers.]

The “Smartest Man in the Room.”

In a profession where outsized egos are the norm, Dr. Sen. Richard Briggs has perhaps the largest one in state government. Thinly veiled condescension accompanies many of his comments from the dais, and his colleagues privately say that Briggs considers himself the smartest man in any room he walks into.

But aside from the chutzpah that can come from someone trained to cut open other people’s chests, what other things does the Dr. Sen. bring to the table?

Conflicts of interest. And lots of them.

As the point person for his friend Bill Haslam’s effort to expand Obamacare into Tennessee, Briggs was downright gleeful over last Friday’s Supreme Court decision on Obamacare. Briggs rushed right out and crowed about how that decision would help pass InsureTN.  Obama’s lobbying trip to Tennessee yesterday must have thrilled Briggs to no end.

To help put all of he Dr. Sen. Briggs’ enthusiasm for socialized healthcare  into perspective, RTP has taken a look into the capitalistic roots of Dr. Sen. Briggs’ personal agenda. You see, for Briggs Obamacare and Medicaid expansion are not only good for what ails the proletariat, there is the added advantage of lining the pockets of Dr. Briggs and his cronies with taxpayer dollars.

This from Tuesday’s  Chattanooga Times/News Press:

“Briggs, a physician who stepped up to lead the second attempt to pass Haslam’s Insure Tennessee, noted that groups [like the] Tennessee Hospital Association, Tennessee Chamber of Commerce and others back the Medicaid expansion.”

While Briggs was highlighting all those “powerful” groups that have (unsuccessfully) supported InsureTN, he just kinda sorta forgot to mention one of the main players in the THA, which is also one of the biggest hospital conglomerates in the country, and one who is supporting InsureTN because it will benefit them financially, big time. And just who is this medical corporate behemoth who will be feasting on the taxpayers with the extra money from InsureTN (money that doesn’t really exist, of course, but will instead just be added to the national debt)?

And just who is Tennova? Why, Dr. Sen. Richard Briggs’ employer, that’s who. Pay attention, peasants! Briggs works for Tennova and Tennova will rake in millions in extra fees from InsureTN. That will sure help pay Briggs’ huge salary.

But Dr. Sen. Briggs does more than just draw a paycheck from Tennova – he sits on their Board of Directors. In that position he gets to help make decisions on how much money the senior executives and others can siphon off from the taxpayers. What a deal!

And just to put a cherry on top, it is important to know just who the Tennova Board of Directors chose to represent them in Nashville on InsureTN. With the Republicans holding super-majorities in both houses of the legislature, who did they select to lobby for them at the capitol?   Jerry Askew — a longtime, unrepentant Democrat who, along with his wife, have contributed to numerous Democrats and listed themselves on committees like “Democrats for Haslam.”  So Briggs and Tennova are getting their healthcare policy advice from Democrats.  Are we the only ones who see a problem here?

But wait. There’s more! To complete this sleazy little picture, the Washington Post recently highlighted the 50 biggest “rip-off” price-gouging hospitals in the country and three of the top 50 were in Tennessee. One of the three hospitals was in the Knoxville area and is owned by – yep — Tennova. Wonder if Dr. Sen. Briggs will bring that up at the next Board of Directors meeting?

Dr. Sen. Briggs apparently thinks concerns about conflicts of interest are only for others, not special people like himself.

Gov. Haslam’s office issued a terse statement that he will neither be at the airport to greet President Obama nor will he attend the photo-op in Madison.  Curious, since the reason Obama is in town is to lobby Tennessee to buy into his god-awful Medicaid expansion program — the very program Haslam tried unsuccessfully to pass twice in the last few months.

But just last year, the governor could not wait to get his picture taken with Obama.  RTP provides this convenient reminder.