GOP Legislators to Governor: “You realize, of course, this means war.”

And you thought that just because the session was over the fireworks had subsided. Think again.

Obviously smarting from the open challenge to his manhood (Chatt. Times Free Press), Gov. Haslam wasted no time assuming the role of  “Brave Sir Robin” in an effort to find his golden niblets once again. 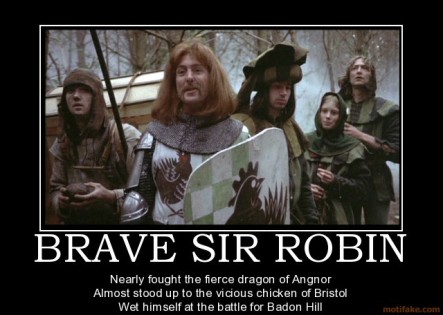 The governor’s chief of staff, Mark “Haters Gonna Hate” Cate, is said to be directing the effort. “Hate” Cate is also apparently really pissed (when is he not?) that the recent editorial took a not-so-veiled personal swipe at his competence.

Even as Speaker Beth Harwell revealed today that the governor’s InsureTennessee could muster no more than a paltry 17 of 73 GOP votes in the House, the administration decided to throw more political capital at a bad program and is now threatening to release personal information about state legislators.  Tellingly, the governor’s office is releasing the information to The InsureTennessean and the Associated Press.  Nah, there’s no punitive retribution going on here.

In a pointed letter to members from Connie Ridley of the Office of Legislative Administration, legislators were informed the administration is going to selectively release personal health insurance information and only on legislators (see below). Ridley accurately describes the move as “dramatic and unprecedented” as well as “a blatant violation of members’ privacy.”  Mark Cate is going to lose his two remaining friends over this Bozo move.

If the governor thought last session was rough on him (defeats on InsureTN, Common Core, longevity pay, subsidized tuition for illegal aliens, etc.), we can hardly wait to see his reaction in the next session, when the legislature takes his initiatives and shoves them down his throat.

Members,
I write to inform you that the Office of Benefits Administration, a division of the Department of Finance and Administration, is releasing further detailed information to the media regarding member health insurance benefits.

This is once again a dramatic and unprecedented departure from policy. As you may remember, I wrote to you in February to inform you that Benefits Administration was departing from their policy to release only the number of legislators and staff on the state health plan. Today, Benefits Administration is going further. They are releasing, both to the Tennessean and the Associated Press, not only the names of legislators on the plan but what type of plan they have, as well as the full cost.

The Office of Legislative Administration views this as a blatant violation of member privacy.  It is the long standing policy of the Office of Legislative Administration to release only the number of legislators and staff on the state insurance plan. The Health Insurance Portability and Accountability Act (HIPPA) precludes releasing names or “any other personally identifying information” as such information is protected health information. It is the opinion of this office that release of personally identifiable enrollment information would be in violation of federal HIPPA privacy protections.