How to make any legislator look like a sucker 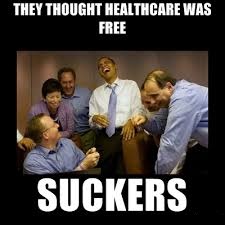 With all the debate over Haslam’s Obamacare expansion proposal and the special session, one question keeps rising to the top:

There are numerous “why?” questions, such as: Why this proposal? Why are we four days out and we still haven’t seen anything in writing? Why can’t we get a straight answer from the governor as to the number of people who will be added to the rolls? Why are we voting on a “verbal” promise from an Obama administration not exactly known for its honesty, etc., etc.

But the biggest “Why” that has gone almost completely unnoticed is “Why now?” Why the mad rush to jam this through now?

In just one month, the U.S. Supreme Court will hear arguments on King vs. Burwell. A decision on the case is expected in June. The case has the very real potential to bring Obamacare crashing down and legal pundits give it at least a 50-50 or better chance of the court ruling in favor of the plaintiffs.

So if Haslam convinces enough Republicans to join all the Democrats in passing his spurious scheme just before a possible negative decision for Obamacare, it will mean all those who voted for it will look like complete fools for expending enormous sums of political capital and passing something in February that will look like an boneheaded and expensive mistake come June.

If a legislator votes for Obamacare expansion (and yes, it IS Obamacare – Herbert Slattery said so), his or her constituents will view them as something akin to the guy who shoved the old lady out of the way to purchase the last ticket on the Titanic – a complete moron.

Haslam has been “negotiating” this abomination for the last 18 months, so why would he not wait a few more weeks to see if it is necessary and/or feasible (not to mention more substantive and documented)? The answer is that a handful of the biggest hospitals –who stand to collect the overwhelming lion’s share of the taxpayer-paid windfall – would find themselves in a much weaker position to con the legislators into going along with Haslam.

Let’s be even more specific: The biggest stockholder of the biggest hospitals is the Frist family (HCA). The Frists could lose money if the legislature doesn’t play ball, meaning less money for them to dump into their pet projects like Common Core, etc. And let us not forget, it was Bill Frist who came out publicly in support of Obamacare after every single Republican in Congress voted against it.

Kinda all comes together when you follow the money, doesn’t it?

As the late Paul Harvey used to say: “and now you know the rest of the story…”

Don’t be a sucker.