Rep. Charles “Last Term” Sargent avoided political execution by the thinnest of margins last Thursday. For that he should be happy, but one would never know it to listen to him. 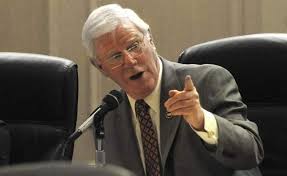 According to multiple sources, Sargent was fuming that someone had the temerity to oppose him in a fair and open election.

“There’s gonna be repercussions. I’m going to get those who made me go through this. I will run [Steve] Gawrys out of the county.” Sargent allegedly said in front of several people at his election night party.

Just how arrogant can one politician be?

And making public threats to run someone out of the county is just stupid.

One week before the election, Sargent political advisor, Jeff Mosely, reportedly forced out Sargent’s campaign manager, Mary Kate Brown – wife of Pfizer lobbyist Josh Brown. Reasons for the dismissal are unknown, but the thin margin of victory indicated that Sargent knew he was in trouble.  Of course this and this may have had something to do with it.  And who could forget “Slushie-Gate?”

Evidence something was wrong back at Sargent HQ came on election night, when Ms. Brown was not celebrating with Sargent as the results came in. She was seen and heard trashing Mosely at the Glen Casada victory party. Time for the Browns to do one of their patented Facebook posts?

The day after the election, Charles Sargent declared in the Tennessean:

“[Sargent] said he was definitely not for Common Core.”

We’ll believe it when we see it.

Sources say that in the days since the election, Sargent has been telling everyone who will listen that Common Core “is dead” and that he will sponsor the legislation to kill it.

Okay, Chuckles. RTP and the people of Tennessee intend to fully hold you to your word: Exactly when will you sponsor and introduce legislation to repeal the hated Common Core agenda of Gov. Bill Haslam and Kevin “I Voted for Obama” Huffman? Let’s see the legislation with your name on it that actually kills Common Core. And don’t try to fool us with a bill that has a good title, but no oomph in the details. It has to be unequivocal.

Oh, and while your at it, how about signing that letter demanding Huffman’s resignation?

If you do all that, we might cut you some slack.