Talk about shooting your reelection in the foot.

Wasn’t it just the last election when House GOP caucus chair (now part of the godless lobbyist corps) Debra Maggart destroyed her political career by pulling a legislative dirty trick to kill a gun rights bill? The catch phrase for that and subsequent elections was that candidates should avoid making similar mistakes that might get them “Maggartized.”

Well here we are just two short years later and yet another member of the GOP House leadership is hell bent on getting “Maggartized” all over again. House Finance chair, Charles Sargent (aka Sgt. Schultz) is current holding up in his committee the gun carry bill that passed the state senate yesterday by 25-2.

The first question is what the hell is a 2nd Amendment rights bill doing in the Finance Committee?  Apparently the GOP establishment snuck a small fiscal note onto the gun bill just so it could go to Finance — the leadership’s committee of choice to kill bills that might negatively affect the sensitive sensibilities of their BMR (Belle Meade Republican) friends.  (Did you see what RTP did there?  “BMR” could also be short for “Beemer,” which is long for “BMW” — the car of choice for many in the hoi polloi neighborhoods.  Is funny, No?). 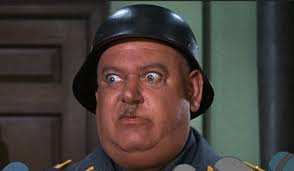 So there sits poor Sargent [sic] Shultz (“I know nothing. I see nothing. Nothing!”) trying to do others’ dirty work, while his deadly serious GOP primary opponent must be smacking his lips over Sargent “Maggartizing” himself.