Lock the Chamber Doors, Ma! The “Commode Caucus” is lookin’ to make a run for it. 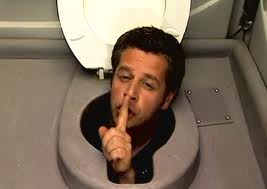 The GOP leadership will try any tactic to keep members from voting up or down on controversial programs like Common Core.  Such tactics range from sending bills to the dead-end of the legislative calendar (as they did with Common Core) to creating spurious fiscal notes while ignoring the governor’s own budget-busting expenditures (which also happened with Common Core).  Our favorite is also one of the Speaker’s favorite tactics:  giving the signal to several GOP legislators to suddenly heed the call of nature and disappear off the floor into the bathrooms until the vote is over, thereby denying the requite 50 votes needed to pass any bill.

But the rebellion on the House floor came so quickly, the leadership did not have the time to get the bathroom doors unlocked before the hammer came down.  Unfortunately for leadership, even a mass flush couldn’t have saved them.  The final vote margin was so huge ( 80-11), that giving a bathroom hall pass would have made no difference.  The opposition had the votes to pass the bill regardless of the faux incontinence of some of its members and the House leadership was handed a humiliating defeat that required Ron Ramsey to bail them out.

But March 13, 2014 may be the day leadership and the governor and their business-as-usual allies were forced to face a grim (for them) reality:  conservatives dominate the House GOP caucus, and they are now beginning to realize they can do something about the way they have been treated by those Republican “leaders” who take glee in blocking conservative legislation from ever coming to a vote.

This should be fun to watch.